This site showcases the Ludum Dare entries since LD32 that the team and I have created. click here1

A little bit of background

Back in February of 2015, my son Thomas was really interested in game development. Since I'm a software engineer, he wanted me to learn how to make games. Specifically he wanted to participate in the Ludum Dare; a game making contest where participants have 48 or 72 hours to make a game...from scratch! I told him I thought it was a great idea, but that I was way too busy to do anything. He at least wanted me to watch the Extra Credits videos on making games, and I felt like I was too busy for that.

So a few weeks pass, and I'm boarding a flight for somewhere, and I find that my flight is delayed by 3 hours! Well, it looks like I've got enough time now, so I started watching the Extra Credits videos. They were inspiring! Every since I was a kid and played games on the Atari/Coleco/Commodore 64, I always wanted to make games. But then I became an adult, and now I do grownup programming. But...just a weekend? Surely I can carve out a weekend to do this. So I started talking to one of my game developer friends, and he recommended that I learn Unity3D. I found a Unity book and began reading. Then I started watching the Brackeys videos and learned how to make a simple platformer. Armed with this knowledge, I set my sights on making a game for the Ludum Dare #32. The folks at TinkerMill hosted the Ludum Dare for our area. It's always nice to have other people with you while you are hacking away late at night. My eldest daughter Tamara and of course Thomas joined in. I did the programming and Thomas helped, and Tamara did the art and story concepts. And after 60 hours of work, we had an actual game! This inspired me to keep continuing to make games for each Ludum Dare, with over a dozen talented game makers and artist joining in the fun. Well, there you have it. This site is dedicated to our games.
Play 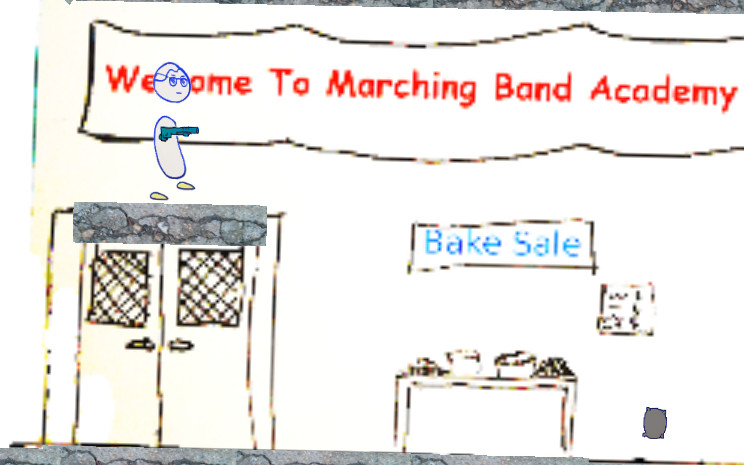 A new building has sprung up next to the Center for Migraine Research....the Marching Band Academy!!! One migraine enraged guy will stop the marching band, and restore peace and tranquility. Tips: The game can be completed in a few minutes. The trick is to know that you can get right up to the enemy and touch it while spamming it with pillows which immediately bounce back to you. You will incur some damage, but the collision seems to only register most of the time as a single hit, and you only sustain 20% damage from it. This is how you get the enemies stuck in the stairwell out. Then when they go "emo", you wait for the emo to slide down, and you can proceed. Movement: About: Created in about 60 hours including artwork and sound which we created for this. No stock assets were used. The "platform" is a picture of the concrete outside of the host site. This is my very first game. My daughter did the artwork, and I pulled it together with Unity. It was a lot of fun. I had no idea you could create a playable(?) game in a weekend. I'm looking forward to the next Ludum Dare.
Play 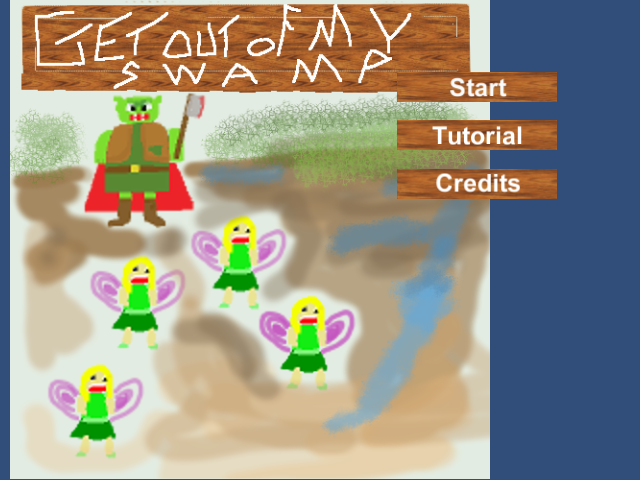 Get Out Of My Swamp

Theme: You are the Monster

The fairies are invading the ogre's swamp, but this time he is not going to talk to some stupid lord..this time it's personal...he will kill all the fairies before they consume his swamp.

Use your mouse to direct the Ogre. Use the W and S key to move forward and backward. Right click (or left click or press space) to drop fairy stopping bricks. The bricks will only last 10 seconds, and you have a limited amount. After the bricks expire, only then do you get them back. Try and create an equilibrium and survive as long as possible. Enjoy!
Unfortunately this doesn't run in WebGL

Attack of the Vikings

The vikings are causing trouble in your village. You must drive them away so that people can be safe again. You discover a magical plant that can GROW tall enough to reach the god of all the vikings up in the skies. However, it needs nutrients to keep GROWING....vikings, that is. So you fling vikings at the plant before the viking hoards can cut it down. Can you destroy the viking god? You will want to play with full screen in order to access the controls to start the game at the bottom of the screen. Use arrow keys (or "a" and "d") to move the player left and right.
Play 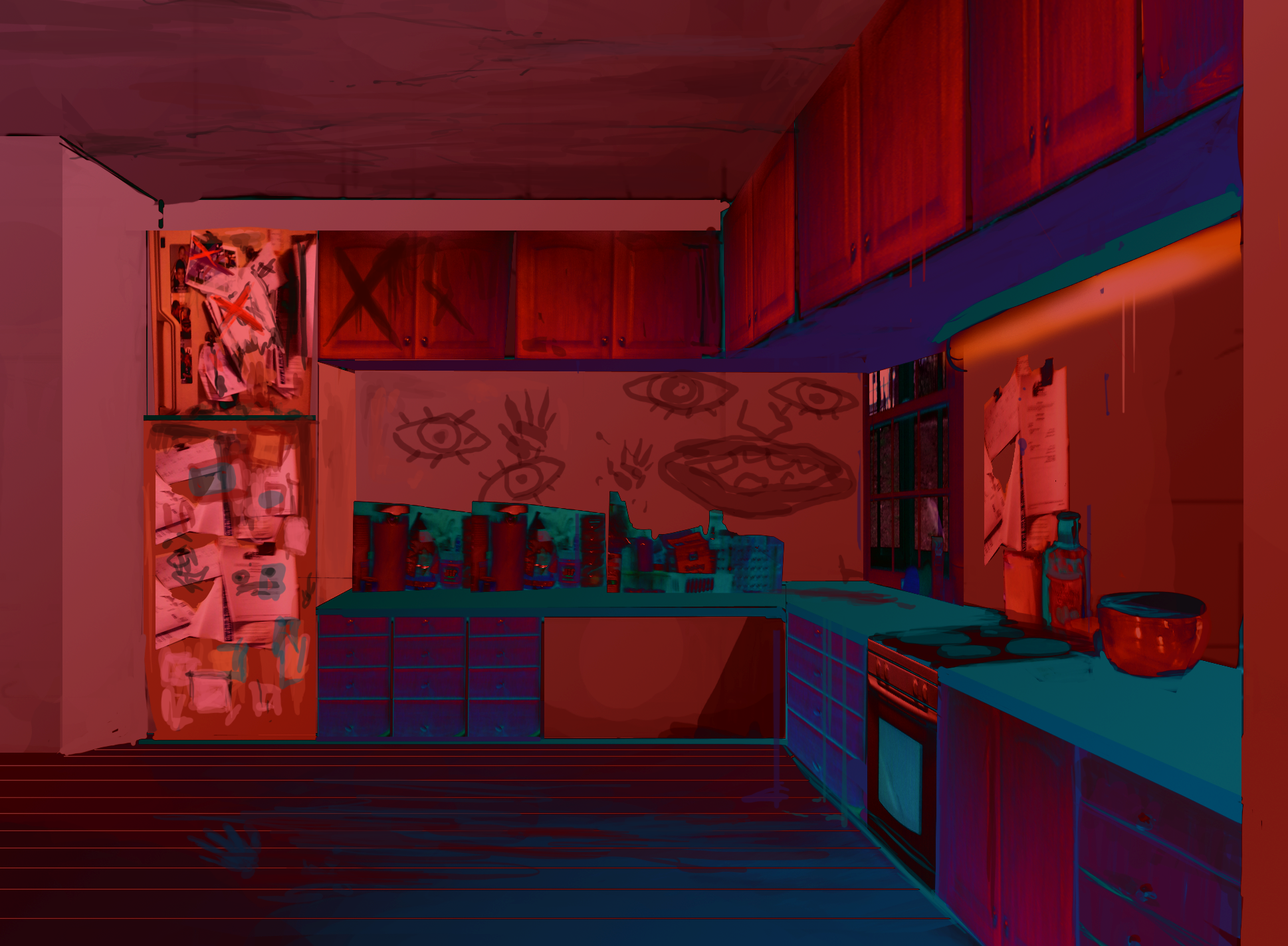 This was the project we did in order to practice for the LD35. This is the first time that I had a fairly large team, and we wanted to work out the problems with working together. This was completed in the same time frame as the Ludum Dare. 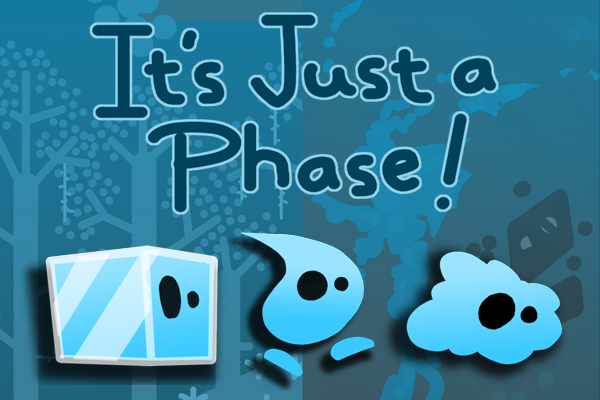 It's Just a Phase!

Droplet has been kidnapped! Help him phase between solid, liquid, and gas to bring him home.

Game play hints: Movement: w to jump, A and D to move left and right. This hardcore platformer was forged from the sweat of 14 talented people many of whom never worked together. They just showed up, a team started to be formed and then even more showed up. This is what I love about Ludum Dare! All art, music, animation, and cutesy you-just-died-again mood created within period of the Ludum Dare contest. Special thanks to Tinkermill for hosting us so we could all come together and be creative and have a great time. Here's a walk through
Play 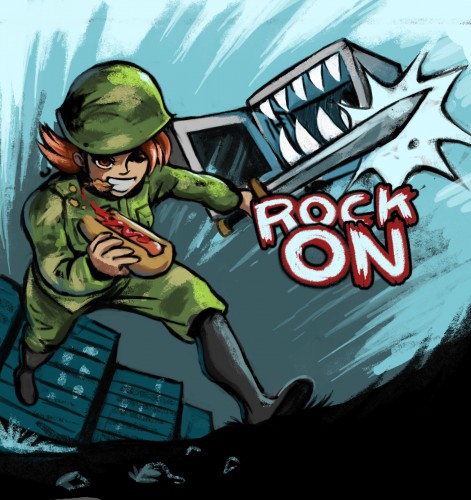 Technology has gone crazy! Battle the possessed tech with increasingly ancient weapons to get to the bottom of what is happening.

Controls WASD to move. left mouse or space to dismiss dialog. During the battles, wisely choose your weapon from inventory in order to defeat your opponent. To remove an item from inventory, you must not be in a battle. Then you click the inventory item you want gone and it is GONE. No getting it back. But now you have freed up a spot. Hotdogs If you click on a hotdog at anytime you eat it and gain health. If you click on the hotdog to regain health during battle, you get the health but you used up a battle turn. Misc All graphics and music created during the event. The code was also developed during the event. I wanted to do a platformer with our great code library we built up, but no no. We just had to make a final fantasy style game. It turned out great, so I can no longer complain. Learned a lot about this genre too. Special thanks to TinkerMill for providing the community that makes this so fun.
Play 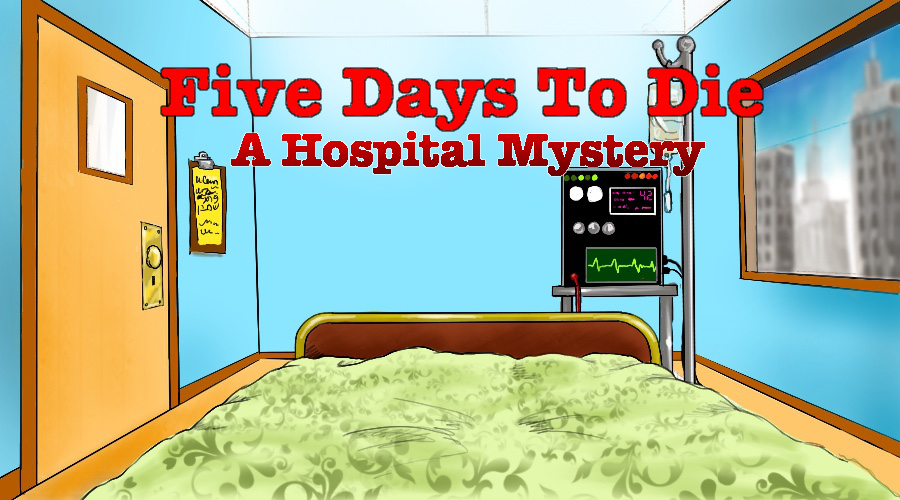 Mrs. Slitherkins the snake wakes up in a hospital -- burned, poisoned, and very confused. Confined to a bed, all she can do is accept the visitors who might be trying to murder her: a ruthless businessgiraffe, a slippery penguin, and a panicking mouse. Help Mrs. Slitherkins endure the jabs of a rabbit, uncover a conspiracy, and fund her ice-skating dreams -- all in the five days before her death.

All artwork, story, and music were created during the event.
Play 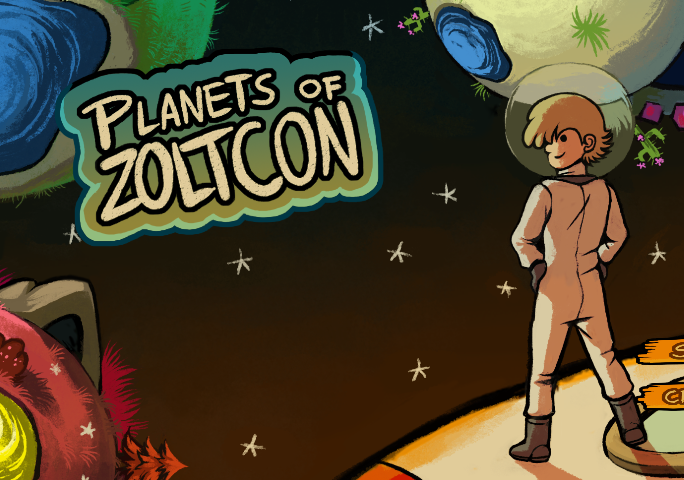 You play an intrepid explorer who stumbles across three planets with unusual behavior. Whenever you step on a planet, it starts shrinking! Master orbital mechanics to hurtle from world to world. Tickle tendrils to jump across platforms. Enter the caves to uncover a mysterious specimen and bring balance back to these small worlds. Press A and D to move left and right. Press W to jump. All art, music, animation, and levels created in 72 hours. 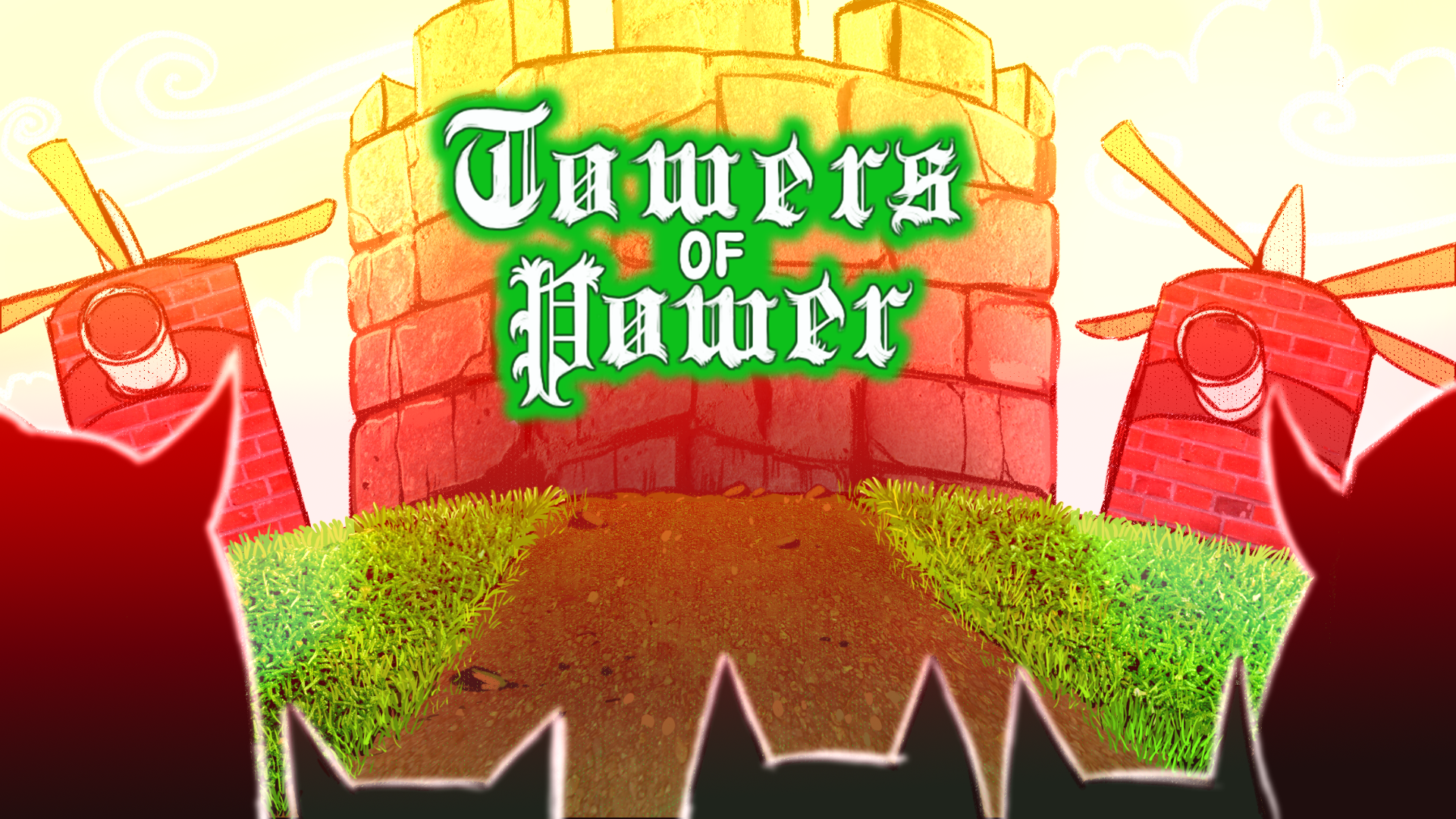 Theme: Running out of power

Your fortress is under attack (again). The ongoing energy crisis has led your tiny neighbors to extreme measures (as usual). You’ve turned off the lights to save on battery, but it’s still not enough (par for the course). Desperate times call for that newfangled energy source: WIND.

Now if only wind would gust on cue.

Harness and redirect wind to shoot down those power-hungry grubs in all five levels of this tower defense game.

All code, art and music created during the game jam!